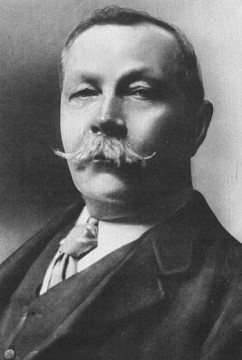 The first time I saw ACD physically as a person, as opposed to a clairvoyant image as I usually saw him, he appeared in a white cloud when I attended a psychic circle. As I was sitting there, a white cloud of ectoplasm formed above my eye level and his face materialised in the cloud. There were also three or four other faces as well; one of them was Sir William Crookes. I have since seen in some old psychic books, photographs of ACDs face in ectoplasmic clouds, and I would say it was very similar to these pictures, but I saw him as more animated. I think I would describe it as like an early 20th century photograph that actually moves.

ACD is well known for his creation, Sherlock Holmes, but unfortunately not enough is said about his interest in spiritualism. He told me one time that “although I spent most of my fortune on promoting and investigating spiritualism, I look back now and realise that not one penny of it was wasted”. But what else do we know about him?

Arthur Ignatius Conan Doyle was born at Picardy Place, in Edinburgh on 22 May 1859. His mother, Mary, was of Irish extraction and traced her ancestry back to the famous Percy family of Northumberland and from there to the Plantagenet line. This historical blood line probably inspired him in later years to write his famous historical novels, The White Company, Sir Nigel, and Micah Clarke. It is more than possible that Sir Arthur’s talent from writing came from his mother’s side, as she had a passion for books and was an accomplished storyteller. He also noticed later in his schools years, a talent to enthral younger school colleagues with wonderful stories that he would make up to entertain them.

The Doyle family was a large one indeed; Arthur was born into a family of ten children, seven of whom survived to maturity. Conan Doyle’s mother had a difficult struggle bringing up the children on a modest income earned by her unenthusiastic husband Charles, who worked as a civil servant. Charles Altamont Doyle was the youngest son of John Doyle, the caricaturist 'H.B.' Charles himself also painted and made book illustrations to supplement his income. On occasions he also worked as a sketch artist on criminal trials. His brothers were quite talented like the man himself. They all made something of a name for themselves: James wrote The Chronicles of England; Henry was manager of the National Gallery in Dublin; and Richard became famous as an artist, most well-known, for his work on the cover design of the satirical magazine Punch. Whilst Charles Doyle also had artistic talents, he exercised his skills only intermittently, and this apparent lack of drive led to the loss of his post in the Office of Works in Edinburgh. After losing his Job, Sir Arthur’s father steadily lapsed in alcoholism, and he had epilepsy which grew increasingly worse, so much so, that he was institutionalised for the final years of his life. He died in 1893. The topic of his father’s alcoholism is reflected in his fictional work later on.

Conan Doyle's was educated at home and in a local Edinburgh school until, at the age of nine, he was sent to the Jesuit preparatory school of Hodder in Lancashire. Hodder was part of the Jesuit secondary school of Stonyhurst. Conan Doyle moved to Stonyhurst two years later. Conan Doyle did quite well academically at Stonyhurst, but did not find the strict and Spartan life of the Jesuit order very appealing; especially the corporal punishment meted out by the priest’s. His mother turned down the chance of a free education offered from the school, in exchange for a life of dedication to Jesuitism. So, instead she met his school expenses herself; although this was a major struggle with the meagre income she had.

While studying in Stonyhurst Sir Arthur examined all aspects of Religion and their belief systems. It may have been the strict religious establishment that made him become agnostic by the time he left in 1875. He certainly seemed to firmly reject Catholicism, together with some disillusionment in Christianity as a whole.

On leaving Stonyhurst in 1875, Sir Arthur travelled to Feldkirch, in Austria, where he spent the year in a Jesuit school. While there, various questions were being asked about many aspects of the Catholic faith. He left Austria returning to his beloved Scotland. With some good advice from his mother’s lodger and lover, Dr. Bryan Waller, he decided to study medicine from 1876 to 1881 at the University of Edinburgh. He gained a medical degree there, but Edinburgh University’s greatest influence was from two people he met there. These two people, Professor Rutherford and Dr Joseph Bell, were the role models for two of his most famous fictional characters. Doyle became Surgeon’s clerk to Joseph Bell in Edinburgh. In the Novel ‘The Lost World’ Professor George Edward Challenger was based on Professor Rutherford’s character; while Dr Joseph Bell’s incredible deductions and reasoning concerning the history of his patients, led to the foundation of the ideas for the Sherlock Holmes detective.