In 1878 he took up some temporary medical assistant positions with Dr. Richardson in Sheffield and Dr. Hoare in Birmingham. Dr. Reginald Hoare treated him like a son and he thoroughly enjoyed his time with him. At this time he was becoming interested in spiritualism where he started to study it intensively.

During 1880 he signed up as ships surgeon on the whaler ship ‘The S.S. Hope’ enjoying an adventurous life at sea. The trip took him up the Arctic, after which he wrote that it had "awakened the soul of a born wanderer" many years later. This maritime adventure helped influence his first story about the sea, a frightening tale called ‘captain of the pole star.’ It can be seen that he enjoyed the life at sea, so much so that after he received his M.D. for Biology in 1881, he signed on as ships Doctor on a West African steamer and nearly died of a fever.

Sir Arthur renounced his catholic faith in 1882. He setup a medical practice with his Edinburgh medical schoolmate, Dr George Budd, in Plymouth. The relationship ended over concerns of Budd’s ethical behaviour. He then moved to Southsea in Portsmouth, where he set up his own practice. While there he married his first wife Louise Hawkins in August 1885. He has his honeymoon in Ireland. During the quiet periods in his practice his started to write stories culminating in the creation of Sherlock Holmes with the detective’s first appearance on the scene in ‘A Study in Scarlet’. This was published in ‘Beeton’s Christmas Annual’ in 1887. He starts to attend psychic meetings in Southsea. 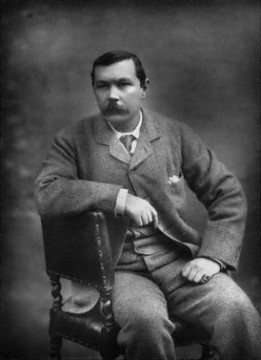 Success as a Novel writer comes quickly with the publishing of the historical novel ‘Micah Clarke’. He met Oscar Wilde at a dinner in the summer of 1889 and was flattered by Wilde over his latest novel which he enjoyed immensely. As a consequence of this dinner, the owner of Lippincott's monthly magazine commissioned Conan Doyle to write a short novel. Thus began the next instalment of Sherlock Holmes, the ‘Sign of the four’ is published the next year. In 1890 he went to Berlin to write a review of Dr. Robert Koch’s a cure for tuberculosis; then he moved to Vienna where he studied ophthalmology for a year.

In the early part of 1891 he left Southsea and returned to London to open an eye practice at 2 Upper Wimpole Street. Unfortunately, few clients turned up to his practice. In fact it was said in his autobiography that not one crossed his door. This ‘disaster’ leaves him with plenty of spare time to write stories about Sherlock Holmes, resulting in the first six ‘Adventures of Sherlock Holmes’ published in The Strand Magazine, which fortuitously for him, started it’s first publication that year. 1891 is a defining year for Conan Doyle where a bad bout of Influenza nearly leaves him with a permanent departure from this world to the next. Suddenly he had “a wild rush of joy” glorious realisation that he cannot combine his medical practice with a literary career, thus he set out to become a fulltime writer. During the writing of the Sherlock Holmes stories he publishes another great novel that year called ‘The White Company’. His historical novels are more of a passion for Conan Doyle in contrast to the Sherlock Holmes stories, which were in the end to give him his fame and fortune. He confides in his mother that he would like to kill of Sherlock Holmes and concentrate on “better things”; in this case more literary novels. His mother advises him against this, so he temporarily puts it off for a few years until 1893, when a trip to Switzerland brought him to the Richenbach Falls. The falls inspired him with the location and idea of how to kill off Holmes which he did in a ‘fatal’ struggle with Professor Moriarty, his arch nemesis.

The story of Holmes death is published as ‘The Final Problem’ in The Strand. Holmes meets his death with professor Moriarty at Richenbach Falls leaving his many fans horrified.It was well known that many of his fans wore mourning bands and The Strand lost 20,000 subscriptions. 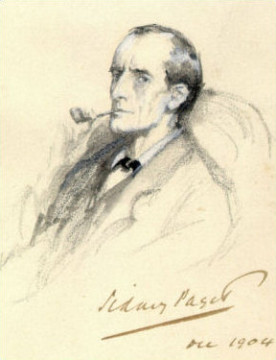 Sir Arthur had other things on his mind in 1893, as his wife was diagnosed with tuberculosis (TB) and his father Charles died. He built a home at Undershaw in Hindhead, Surrey, as the mountain air was supposed to be beneficial for his wife Louise health. Sir Arthur takes up Skiing at Davos in the Alps which he enjoyed immensely, but the skiing also allowed had a positive secondary affect by also giving his wife the benefit of the pure mountain air to help her TB.

In 1895 the Doyle’s left for Cairo in Egypt, in the hope that the warm dry air might affect a cure for Louise’s tuberculosis. While there in 1896, fighting broke out in the Sudan between the British and the Dervishes, so he sent a cable to ‘The Westminster Gazettes’ asking to be appointed their war honorary correspondent for the conflict. They duly obliged and he travelled up the Nile to the front line in Sudan to report on events at first hand. He learned a lot from the war, which later gave him great experience for war reporting on conflicts in later years.