They returned to England and settled in the house Sir Arthur had build in Hindhead, an area that was believed to have dry sheltered air, which would be very beneficial to Louise’s health. 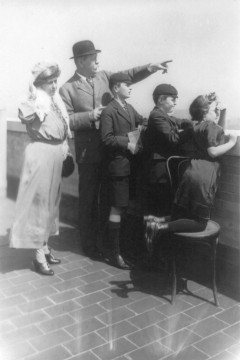 With the outbreak of the South African war in 1899, Sir Arthur attempted to enlist in the Middlesex Yeomanry but was rejected and put on a waiting list instead. While feeling disillusioned about this, he was contacted a friend John Langman who told him that he was setting up at a hospital at his own expense, and suggested that he help supervise the operation, in an unofficial capacity. Conan Doyle jumped at the chance to be involved in some way and set off to South Africa in February 1900. He spent six months there and found the conditions in the Hospital deplorable.

On his return from Africa in 1900 he stood unsuccessfully as a Liberal Unionist parliamentary candidate for Edinburgh central losing by a narrow margin. He also wrote ‘The Great Boer War’ that year, a five hundred-page report of the war and the organisational shortcomings of the British army at the time.

The war led to an extraordinary outburst and denouncement of Britain’s conduct in the war across the globe. Conan Doyle felt impelled to write a short pamphlet entitled, The War in South Africa: Its cause and conduct, which was translated widely. In 1902 the positive reaction to his defence of Britain’s role in the Boer War and his services to the crown in the war itself, led him to receive a knighthood. Gossip had it that King George VII was avid fan of Sherlock Holmes and added Conan Doyle’s name to the honours list to encourage new Sherlock Holmes stories. Conan Doyle had seriously considered refusing the honour as he felt that he did not deserve one for merely “doing his duty” in defending his country. His mother had other ideas and persuaded him to accept it, for the “good” of the historical family history.

Doyle set to work on a serialisation of “The Return of Sherlock Holmes” in The Strand magazine, which was published in 1903. Success in writing was balanced with tragedy three years later when in 1906 his wife Louisa died. Sir Arthur went into a period of depression. But he snapped out this with his insatiable desire to fight injustice and this led to him taking on, as he saw it, a miscarriage of Justice. It involved a man called George Edalji who was convicted of savage attacks on cattle and horses in the district of Great Wyrley, near Birmingham.

George Edalji grew up in Great Wyrley. His family who, were of Indian origin became, the victims of racial intolerance with disturbing anonymous letters being sent to them. A disgruntled servant of the family later confessed to sending the letters.

In 1892 more anonymous letters were sent to the family and this time George was implicated by the Chief Constable of Staffordshire who it was said had a grudge against young George, saying that he “knew” George was responsible for writing some anonymous letters and that 'he hoped to give the culprit a dose of penal servitude'. George was an excellent student in school and it was out of character that the boy would be involved in something like this. In the mean time studied hard and became a solicitor.

In 1903 a series of animal mutilations occurred in Great Wyrley involving the slashing of cows, sheep, and horses. The animals had shallow cuts slashed underneath their stomachs and they bled to death. An anonymous letter implicated George as the culprit and he was arrested.

He was found guilty and sentenced to seven years hard labour on some dubious evidence presented in court.

Not everyone was convinced that George Edalji was the culprit and a petition of 10,000 names grew into a pressure movement where it was suggested that this led to his release from prison after three years. No reason for his release was given. He received no apology, no compensation, or pardon.

Conan Doyle’s articles led to the case being reviewed and although he was released after three years in prison in 1906, he was denied compensation from the government for his suffering. Doyle reviewed the evidence in true Sherlockian manner. Doyle discovered that the “bloody razor” found in George’s house, which was presented in court as evidence that Edalji used it in the mutilations, was just a rusty old razor blade. The handwriting expert, who matched the writing on the anonymous taunting notes to be that of Georges, made a serious mistake in another case where a man was innocently jailed. The mud from Georges boot used as evidence that he was in the field where the final mutilation took place, was of a different soil type to where the last mutilation took place. Also, the mutilations and taunting letters continued to be sent after he was jailed. But Sir Arthur’s absolute proof in his eyes came, when he set up a meeting with George in the hotel he was staying at. He was running late and arrived to see George Edalji reading the paper to pass the time. He noticed that he read it up close and a bit to the side. Being a trained optician he knew straight away that this was a condition of myopia and astigmatism. The idea that such a defect would enable a man to creep around in the dark while avoiding watching farmers or police was just ludicrous. In an instant he knew George was innocent. So, he set about writing a series of articles outlining the case and the evidence in The Daily Telegraph which caught the publics’ attention.

As a direct result of this, a private committee was set up to look over the evidence, as there were no procedures for retrials. The committee cleared George Edalji of the mutilations but found him guilty of writing the anonymous letters. Subsequently, the law society readmitted him to their roll of solicitors from which he had been barred and subscription of £300 pounds was raised for him in The Daily Telegraph.

Another important result of the whole process was that Sir Arthur’s campaign showed the urgent need of an appeal process for convictions, so this led to the establishment of a Court of Appeal in 1907. Sir Arthur’s pressure opened a way to correct any miscarriages of Justice in the future.

In 1906 he again tried his hands at politics when he ran as a Unionist candidate for parliament in the Border Burghs, but was again unsuccessful.