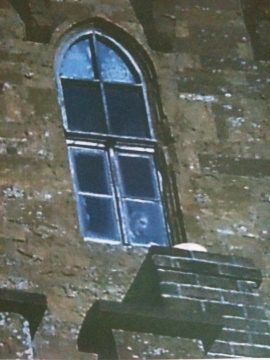 This picture was taken at a famous castle folly in Warwickshire, it is currently a pub called The Castle Inn and when we stayed there to film we were shown this photo taken by a tourist who spotting a figure in the window afterwards. The top room was known to be haunted and Patrick McNamara picked up on an individual who lived and died there BEFORE he was shown this photo. Patrick said that he had a bad chest, worked for the owner who was a Georgian gentlemen who let him stay there, and later died of TB.