The film was played in front of an astonished audience including all the magicians present. On the screen the audience could see two dinosaurs battling against each other in a jungle. Nobody could believe what their eyes were seeing and they accepted it to be true. Sir Arthur said nothing afterwards. He stole the show, so much so that the New York Times ran a story about it the next day. The Journalist couldn’t be sure whether it was real and Conan Doyle was really using some sort of psychic projection from the past or, if Conan Doyle just making fun of the occasion. It looked so life like on screen that all those present were naturally convinced and it was all they could talk about afterwards. The New York Times headline the next day was:

DINOSAURS CAVORT IN FILM FOR DOYLE

SPIRITIST MYSTIFIES WORLD-FAMED MAGICIANS WITH PICTURES OF PREHISTORIC BEASTS--KEEPS ORIGIN A SECRET--MONSTERS OF OTHER AGES SHOWN, SOME FIGHTING, SOME AT PLAY, IN THEIR NATIVE JUNGLES

The next day, after the story appeared, Conan Doyle explained that it was test footage from his upcoming film ‘The Lost World’, and that Willis O’Brien had created the combating Dinosaurs sequence. O’Brien subsequently made the special effects for the film classic King Kong in 1933.

In 1925 his book ‘The Lost World’, starring his second most famous character, Professor Challenger was made into a feature film and released. It was a great success and Sir Arthur set about writing more novels on his character including The Land of Mist, The Disintegration Machine and When the World Screamed. He needed an income to promote his spiritualism work so he carried on and compiled twelve stories about Sherlock Holmes in The Casebook of Sherlock Holmes in 1928.

His penultimate spiritualism tour occurred in 1928 when he went to South Africa for five months. In 1929 he set off on his final spiritualism tour to the Nordic countries, taking in Holland, Denmark, Norway, and Sweden. He was in great pain and extremely ill, so much so that he had to be carried ashore when he returned.

He suffered a heart attack in the spring of 1930 when he was found in his garden clutching his heart with one hand, and holding a single white snowdrop in the other. One of the last acts he did was to struggle up to London to head a deputation to the Home Secretary to change the centuries old law under which Spiritualist mediums were prosecuted. He died on July the 7th of that year in his Crowborough home. His funeral was more like a garden party with summer dresses worn and few people mourning. There were so many flowers sent, that a special train was needed to bring them all, and they covered the whole field outside. His headstone inscription was brief. On it was inscribed his name, his date of birth, and four words: Steel true - blade straight.

Sir Arthur declared his belief of spiritualism in 1916 in Light magazine and promoted it vigorously after the death of his son in 1918. Many people often ridiculed him for his belief in spiritualism, especially his peers. On many occasions the press mocked him, many thought he was gullible, even mad. Unfortunately during the 1920s, spiritualism was tainted so much by fraudulent mediums who were taking money from desperate people trying to contact their loved ones; it obscured the genuine mediums that were actually giving excellent evidential proof. Conan Doyle did his best to expose these fake mediums himself, as he knew how detrimental they were to his own cause. But, the many bad ones were exposed, and the good ones never got reported in the press. However, then came the most evangelical sceptic, who made it his ambition to expose fraudulent mediums. His name was Harry Houdini, the world’s most famous magician. Harry Houdini and ACD had opposing views in the existence of life after death, but remained good friends or were at least pleasant to each other. Their relationship helped each other’s profile so he they both kept it cordial. ACD even believed that Houdini had psychic abilities which he wrote about in his book the ‘The Edge of the Unknown’.

Arthur Conan Doyle was (is still) an extraordinary man. Apart from his Sherlock Holmes creation which made him a very successful author writing over 60 books, he was an avid sportsman being a goalie and founder member of Portsmouth football club, he played cricket for the M.C.C at Lords, rugby, golf, was an expert at Billiards, a pioneer motorist, driving his first car for the first time ever back to his house a distance of over two hundred and seventy miles; he excelled at boxing and introduced cross-country skiing into Switzerland. He never stopped writing as he wrote to the newspapers on all manner of topics; always a strong campaigner for the underdog, which helped release two innocent men from prison, took a keen interest in photography, which led him to write respected articles to The British Journal of Photography. He spent the last 13 years of his life tirelessly promoting his spiritualist beliefs. He opened a bookshop in London and a museum, both were subsidised by his income. He once famously said of the subsidising of the bookshop and museum that,"I might play with a steam yacht or own race horses. I prefer to do this." He had an extraordinary life and lived it to the full. Look at his many talents, as a doctor, a writer, medical officer, war reporter, advocate for justice, unsuccessful candidate for parliament, psychic investigator, dedicated promoter of spiritualism and life after death, where he travelling around the world giving lectures on this topic, for the last years of his life right up until his death on July 7th 1930, at the age of 71. His missionary drive probably killed him off quicker than he should have, as he was quite ill near in the last few years; but against doctors advice he continued with a punishing schedule right to the end. As he lay in at home in bed with his family around him, he whispered into his wife Jean’s ear his final words saying to her;

“You are wonderful”. With that he passed away. 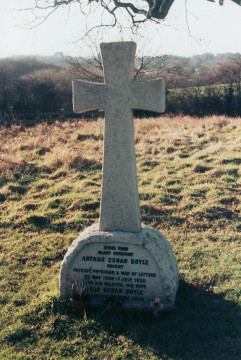 I look forward to accompanying ACD to the great libraries and halls of learning, where the ideas and thoughts projected by him during his lifetime are still in existence. These ideas would be things such as the plots, the romances, and the characters that he never used, but maybe thought about. Imagine the joy of seeing several hundred copies of your favourite story with these different characters, the twists in the stories and the surprise endings he may not have used. You can find out anything and everything to do with Sherlock Holmes and all the other books of course, like his historical novels, and the Strand magazine stories. The opportunities are endless.